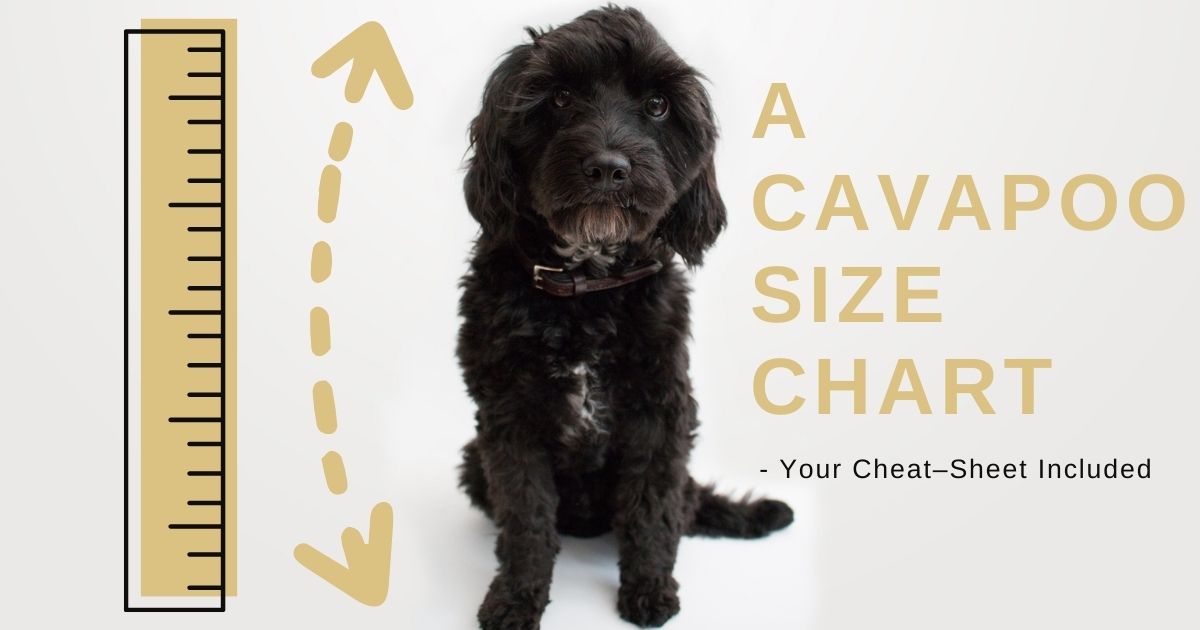 How Big Do Cavapoos Get?

If you’re considering getting a Cavapoo, you’re undoubtedly curious about how big they grow. According to a Cavapoo size chart, a fully developed Cavapoo weighs between 9 pounds and 25 pounds (4.08 kilograms and 11.3 kilograms) and stands between 9 inches and 16 inches (22.8 centimeters and 40.6 centimeters) tall.

Cavapoos are fully grown by the time they are 12 months. Around 7.5 to 11 months, toy Cavapoos acquire adult size.

Because full-grown Cavapoos are smaller than some larger Doodles, they tend to achieve their full size sooner. They will usually grow the fastest until they reach half their adult size. After that, their growth slows and eventually stops at the age of one year.

This could happen sooner or later, depending on their estimated size. Take a look at the Cavapoo size comparison chart below:

One of the most prevalent generations sold by dog breeders is the F1 Cavapoo. F1 Cavapoo genes, on the other hand, aren’t particularly good. This is because an F1 Cavapoo’s DNA can vary greatly, affecting their appearance. They might have hair-shedding straight coats or nonshedding wavy coats.

The best thing about an F1 Cavapoo is its health advantage called “Hybrid Vigor.” The initial cross between two full-blooded purebred dogs will be healthier than either of the parent purebred dogs. A purebred is essentially inbreeding of the same genes that cause hereditary illnesses.

Because Cavapoos are crossbreed or hybrid dogs, they will only inherit diseases that affect both the Poodle and the Cavalier King Charles Spaniel.

Backcross breeding with a Poodle is common since Poodles shed less and are significantly more hypoallergenic. We call this generation an F1B Cavapoo since it is backcross.

An F1B Cavapoo is 75 percent Poodle and 25% Cavalier King Charles Spaniel, meaning it has Poodle DNA in the majority.

Because they are one of the most hypoallergenic and nonshedding Cavapoo generations, the F1B is one of the most popular. The majority of “allergy-friendly” Cavapoos are F1B Cavapoos.

There are numerous distinct characteristics that you will notice in an F1B Cavapoo. The wavy or curly coat that F1B Cavapoos inherit from their Poodle bloodlines is almost always present.

This means that hair shedding is quite improbable. When a dog does not shed, it is typically more hypoallergenic than a dog with a straight coat. This is because curly coats produce less dander in the air. The disadvantage of a nonshedding Cavapoo is that you will have to brush it frequently, give it a haircut with pet clippers, or take it to the groomer.

F1B Cavapoos are most likely to develop a Poodle’s personality and attributes. They will most likely have longer legs, have a lot of energy, and require physical activity. If you do not give your F1B Cavapoo enough exercise or mental stimulation, they’ll chew on things around the house and find other methods to relieve their energy.

F1B Cavapoos benefit from some of the Hybrid Vigor’s health benefits as well. This suggests that this Cavapoo generation will be significantly healthier than its full-blooded parents. Because an F1B is officially a “second” generation Cavapoo, it lacks the complete range of Hybrid Vitality features. The amount of hybrid vitality decreases with each generation.

In contrast, some dog breeders would combine an F1B Cavapoo with another F1B Cavapoo, resulting in an F2B Cavapoo that is 75 percent Poodle and 25% Cavalier King Charles Spaniel.

The F2B Cavapoo generation contains significant Poodle genes, resulting in a wavy or curly coat. This means the F2B Cavapoo is often nonshedding and hypoallergenic.

There are always exceptions to the genetic lottery, as with most hybrid dogs. You will also need to regularly groom your F2B Cavapoo with dog clippers. Consider purchasing a dog grooming kit and grooming your dog at home. Because they are the third generation of offspring, the F2B Cavapoo generation is often called a Multi-generation Cavapoo.

Cavapoos cannot care for themselves after birth because of their fragile state of being blind, deaf, and toothless during this time. Their mother will provide nourishment, comfort, and warmth since they rely on her.

Because their muscles haven’t developed yet, newborn Cavapoos snuggle close to their mother. To survive and grow, they require the ideal temperature. Their first concern is staying nourished and warm, and they will cry if you do not address these needs.

Your Cavapoo will undergo many changes during this time, as their muscles strengthen and their eyes and ears open. They grow teeth and are completely weaned, learning to howl and make bark-like sounds. Most Cavapoo mothers will begin weaning their children once they have gained some independence from their mother.

Teething will occur during this time for the Cavapoo puppy. At six months, Cavapoos females are a little smaller. Your Cavapoo is weaned and eating puppy chow and is beginning to learn about socializing. He can have a physical growth spurt at this age because of diet changes.

Your Cavapoo will enter the heat cycle at this point, which will last around 4-8 weeks and make the females fertile, but we do not recommend that she give birth at this time. Small breed dogs can mature sexually and psychologically at eight months. Sexual maturity may occur before physical or mental adulthood in the Cavapoo.

Your dog can become pregnant as young as six months old if he is not sterile and you are not vigilant. Cavapoos, for example, are usually no longer pups by the time they reach 18 months, give or take a few months.

Your Cavapoo is quite busy right now, eager to explore his surroundings and understand boundaries. Unfortunately, this is when owners start to experience issues with their dog’s behavior. This is the perfect time to teach your dog good habits.

Adult  males and females of the Cavapoo will have completed their growing by two years. Full-grown Cavapoo adults have a full curly coat and are athletic and loving.

So, how can you estimate the size of a Cavapoo puppy? Look at their parents as a general rule of thumb, as the parents’ size significantly impacts the full-grown size of your puppy. Female Cavapoos can also be slightly smaller than male full-grown Cavapoos. Even though the difference isn’t large, it’s worth noting.

When Do Cavapoos Stop Growing?

A Cavapoo puppy will typically mature between the ages of one to two years. This breed’s growth varies from dog to dog; however, breed, Cavapoo size, sexual maturity, and socialization influence this growth.

Cavapoos are little breed dogs, they attain full-grown size by the time they reach their first birthday. However, your Cavapoo may grow the most of its weight between the ages of four to six months. This is before any significant size gain begins to slow.

You may also notice that your female Cavapoo is slightly shorter than her brothers in height. This is because female dogs, like many other animals, are more compact than their male counterparts. A Cavapoo will have gained approximately 75% of its whole weight and grown to roughly 90% of its total height by the time it reaches seven months of age.

Cavapoos grow between 9 inches and 14 inches (22.9-35.6 centimeters) tall when they attain a Cavapoo full size. Despite their diminutive stature, they have a lot of personalities and get along with both children and adults.

Because their Cavalier parents were pure breeds and regarded as lap dogs, Cavapoos are more calm back. Their gorgeous coats and low shedding tendencies inherit from their Poodle parents.

How to Fix Incorrect Cavapoo Weight?

Because the Cavapoo is a relatively young breed, there are minimal size guidelines. Cavapoos are small to medium-sized dogs that are a mix of Cavalier King Charles Spaniel and Poodle parents.

It is determined mainly by the Poodle parent’s size. Most are between 9 and 14 inches (22.9-35.6 centimeters) tall at the shoulder and weigh between 9 pounds and 25 pounds (4.1-11.3 kilograms), even though many can be smaller or larger. Also, remember that even if two dogs share the same parents, they are unlikely to be the same size or weight.

There will be a large puppy, some medium-sized Cavapoos, and the litter’s ‘runt.’ Even though they may appear identical at birth, you will find substantial distinctions between dogs as they age.

The Cavapoo is a mixed breed with a significant risk of contracting the same diseases as the Cavalier King Charles spaniel and Poodle. While most are generally healthy, others may be predisposed to a few health problems.

The best Cavapoo generation is highly subjective, but you should consider your priorities while choosing a puppy to make an informed conclusion. If you have allergies, an F1BB Cavapoo is the best choice for a nonshedding dog, followed by the F2BB, F1B, and F2B generations in that order.

If allergies aren’t an issue, it’s difficult to go wrong with an F1 Cavapoo, which offers the most genetic diversity at a low price. Remember that any dog, especially Cavapoos, is only as good as its breeder.

When you combine a reputable breeder with great pet insurance, you’ll be doing everything to keep your dog healthy for the rest of their lives! This article most definitely provides all the information you require to answer this question, is your Cavapoo full grown?