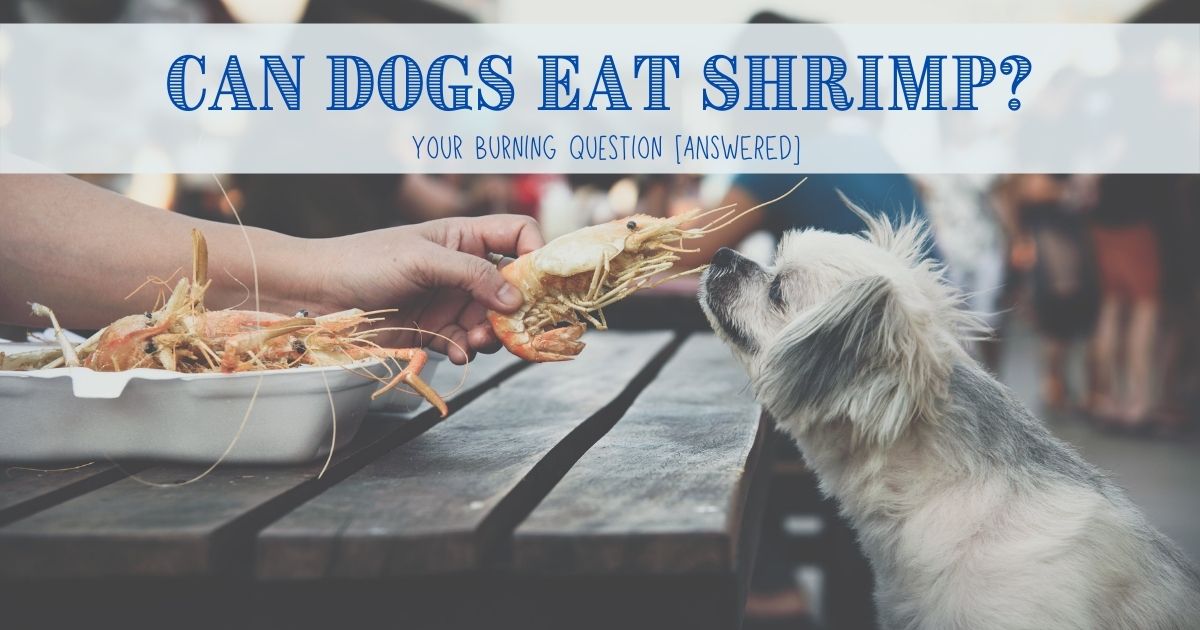 Shrimps are a favorite meal for many people as they contain various health benefits. But, can dogs eat shrimp? Well, this is a burning question that many dog owners leave unanswered. They don’t know that they can set aside four or five pieces of shrimp for their fur baby.

These aquatic critters are full of protein for building the body. On top of that, the tasty seafood also contains nutrients such as phosphorus and vitamin B12. These nutrients play a vital role in gastrointestinal health and metabolism.

Therefore, if you’ve just steamed up your shrimp, here’s everything you need to know about including it in your diet:

Shrimp is a type of seafood that contains various health benefits, such as boosting metabolism. It is commonly known for human consumption. Can dogs eat shrimp?

The truth is, dogs can eat shrimp. However, this is only possible if administered in moderation. While doing this, you have to watch on a few factors because dogs are different and react differently to shrimp.

In a nutshell, one or two pieces are enough for your pup, but it can be better if you feed smaller amounts to puppies. Generally, consult your veterinarian on shrimp administration. This way, you’ll be able to watch your dog’s diet and health.

Is Shrimp Bad for Dogs?

Many dog owners love eating with their four-legged friends. What harm does a little bite of shrimp do? Shrimp is nutritious, but it can be dangerous too. Therefore, let’s find out the good and the bad.

Shrimp often gets a bad rap for containing a lot of cholesterol content. However, this content is not essential for a dog since it can cause cardiovascular diseases and other health issues when consumed in high amounts. If you want to reduce the content, avoid frying food.

Another reason why shrimp is bad for dogs is the choking hazard. Choking occurs because the food contains bony structures. These structures are not suitable since they can block the throat, thus choking.

To avoid all these, cut the shrimp into the right pieces and then cook thoroughly. In the end, you’ll have a safe meal for your canine friend.

Intestinal blockage is the third cause of shrimp being bad. Since it contains shells and tails, it might be hard to digest due to irritation. As a result, the intestines get blocked and fail to function properly.

Do dogs have allergies? Yes. Just like human beings, dogs too are allergic to shrimps. These shrimps cause adverse effects. The condition is commonly known as anaphylaxis. Also called allergic shock, it occurs immediately after ingestion. When this happens, seek medical attention from a qualified veterinarian.

Shrimp contains several bacteria, such as E. coli and Vibrio. The bacteria breaks down waste products, which suppress the growth of pathogens. However, these bacteria can be toxic to dogs if it is administered when not cooked properly.

Shrimp is a delicious snack to add to your dogs’ diet. It contains a good amount of protein and fatty acids, which help build the whole body system. For it to be edible enough, you need to cook it properly and unseasoned. Since it contains bones that might choke your dog, debone properly.

Besides that, there are different dog breeds; each consumes shrimp but in different amounts. Moreover, some love it while others don’t. So while shrimp is safe for dogs to eat, the levels of feeding vary. And this brings us down to senior and adult dogs.

Dogs are known to produce glucosamine-an amino sugar made from glutamine and glucose. Dogs produce this sugar naturally, but as they get older, the level becomes less. This reduces shock absorption, thus stiffening the joints. Also, the amount of consumption is different. Seniors will consume more than adult ones.

Most people will happily share their meals (seafood, too) or snacks with their pets. But can puppies eat shrimp? Yes, puppies can eat shrimp as it contains health benefits. While this is a delicious snack for many dogs and puppies, one thing to note is that the level of consumption differs.

Dogs tend to eat more shrimp than puppies. Puppies can only have a bit of one shrimp. The reason behind this is that their immune system is still low. For this reason, you’ll need to administer in small amounts.

Another reason is that puppies’ bodies are still developing. If given in large amounts. Shrimp can lead to gastrointestinal disorders such as vomiting or gas. Therefore, debone the shrimp, clean it, and cook it properly while unseasoned.

My Dog Ate Shrimp. What Now?

Shrimps are among the healthy seafood to include in your and your dog’s diet. So, if your dog ate shrimp, don’t panic! The very first important thing to do is to contact your veterinarian. This is essential since your pup might be allergic to it, and if so, it might cause adverse effects.

Furthermore, they might have eaten the shells accidentally. These shells are a no-go zone since they can block the digestive tract and cause bowel obstruction. It can also check your dog if swallowed, thus breathing obstruction. So, seek help from a vet immediately if you suspect that your dog has eaten shrimp.

The Beneficial Side of Dogs Eating Shrimp

Apart from shrimp having adverse effects, it also contains a good side. If your dog consumed shrimp, the good news is that it:

Have you ever noticed the pink color that appears while cooking shrimp? This is not a call for alarm. It is simply the production of astaxanthin found in the shrimp. This red pigment is a powerful antioxidant as it can fight radicals that destroy the cells.

Taurine is an amino acid that supports the immune system, heart, eyes, and brain. The better part is that dogs produce these substances. However, shrimp contains it too, and consumption of it decreases risks such as blindness.

Minerals and vitamins play a vital role in a dog’s body. For example, shrimp lives in water, and it contains enough nutrients such as B12, D3, and phosphorus which boosts the immune function, prevents cancer and, enhances energy production.

Like Taurine, dogs produce glucosamine which helps in the formation and repair of cartilage. On the contrary, dogs produce less of it when they start aging. Adding shrimp shells into the diet will help improve the production, thus improving mobility.

Shrimps come in raw after being taken from the ocean. Some people enjoy it cooked, while others love it uncooked. But what about dogs? Can dogs eat raw shrimp? No, raw shrimp is not good for dogs.

Why is it so? This is because dogs can be subjected to risks such as flukes, tapeworms, and roundworms which can alter the functioning of their body system.

How Much Shrimp Can Dogs Eat?

Moderation is key when administering shrimp. It is not a dangerous meal to include in your diet, but how you feed them matters. Since dogs are different, the amount of consumption might vary.

This is because some eat more while some consume less. Therefore, feed your dog a small amount of shrimp. Do this as an occasional treat to avoid over-feeding. Administer something like half a cup or less per serving.

While doing this, ensure that it’s not more than once a week. Then, still in feeding, ensure that the shrimp is cooked, and don’t forget to remove shells, veins, and tails as they can choke your canine friend.

What is the Best Way to Serve Shrimp to Dogs?

Before thinking about serving shrimps to dogs, always cook them before feeding. This is essential since it helps remove parasites such as tapeworms. You can steam grill without garlic or butter. Remove shells and tails to prevent a choking hazard.

Also, don’t spice the shrimp, fry, or bread. The result can cause irritation and pain after getting stuck in your dogs’ gums or teeth. While doing this, practice safe food handling protocols when cooking since they can harbor harmful bacteria.

Did you know that dogs can be allergic to food, such as shrimp? Before feeding your dog shrimp, start with a small amount, then monitor the reactions.

If nothing occurs, then you are good to go. But if your canine starts behaving weirdly, check out the following signs and symptoms:

If this happens, visit your vet for a check-up.

Shrimp is a tasty meal to include in your diet. It contains proteins that aid in building the body’s muscles. But have you ever wondered if it is safe for dogs? It is okay for dogs to eat shrimp, but ensure that it is the right amount.

Also, make sure that it has no harmful reactions after eating shrimp. This way, you’ll be able to enjoy a perfect shrimp night with your pet!