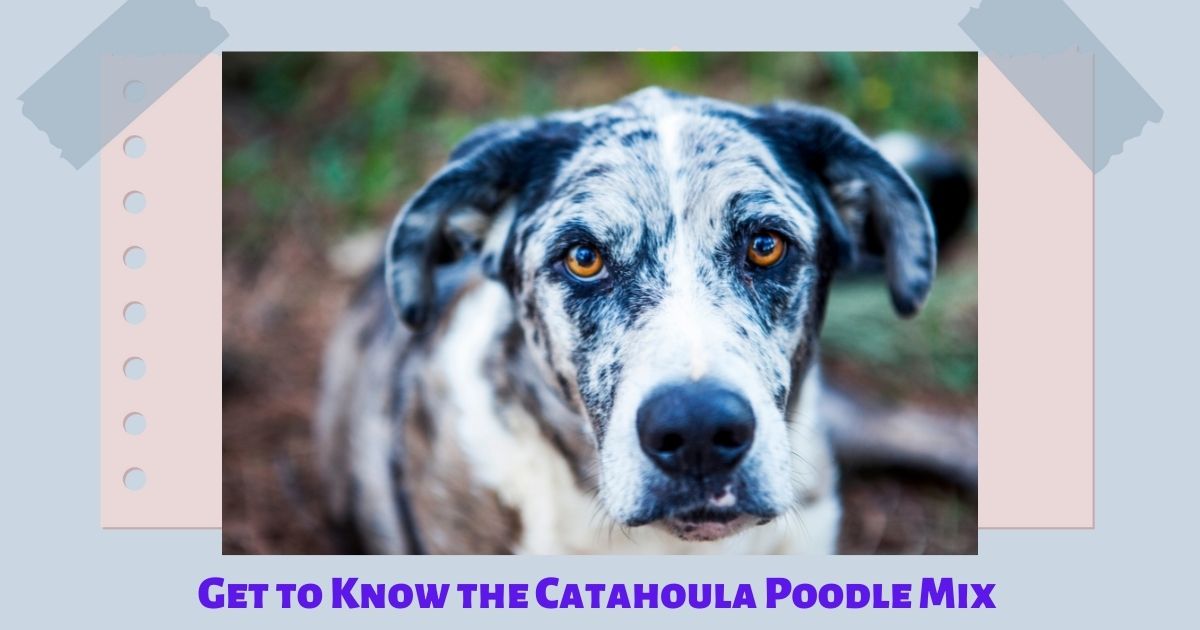 If you are a lover of hybrid dogs, allow us to introduce you to the Catahoula Poodle Mix. Does it sound like a familiar dog breed? If yes, do you know its history, general health information, and more?

Knowing the information helps grow your dog to its full potential. It will also help you treat your Poodle Catahoula mix as a committed dog lover should do. So, which information do you need to know?

What is a Pooda Houla?

Pooda Houla or Pooahoula is a hybrid dog breed. It comes from mating the Poodle with another dog breed called the Catahoula Cur. Some people call it Louisiana Catahoula Cur or Catahoula Doodle. The smaller sizes of Pooda Houla are a result of mating Miniature Poodles with Catahoula Curs.

Notably, you should remember to keep watch when Poodahoulas feed. They are heavy feeders, and they can put on weight quickly. However, they burn their energy fast because they are active dogs.

So besides watching their diet, you should minimize their exercise after a meal to prevent bloating.

What is the Average Size of a Catahoula Poodle Mix?

One of the major concerns of this hybrid dog is Canine Hip Dysplasia. It is an inherited disease that causes a malformation of the hip joints. One of the signs of the disease is trouble when a Pooahoula tries to stand up after lying down. If untreated, hip dysplasia causes arthritis. The other concern is bloating. Pooda Houlas bloat when they exercise right after feeding.

Occasionally, this breed of dog suffers from Patellar Luxation, Hypothyroidism, and Cushing’s Syndrome.

The breed is also vulnerable to cataracts, Glaucoma, Diabetes, Von Willebrand’s disease, and Addison’s disease. However, the probability of contracting these health conditions is low.

So, you should occasionally take your Pooda Houla to a vet for the following tests: radiographs, blood analysis, blood sugar, thyroid tests, and a complete physical examination.

The available literature about Pooda Houlas does not offer much information on the breed’s history. However, you can learn about the history of the Poodle and Catahoula in their own capacities.

The Catahoula Cur is an American dog breed that originated from Lake Catahoula in Northern Louisiana. When Europeans settled in the South-Eastern US, they came with Greyhounds and Bloodhounds. The European dog breeds mated with the native dogs to produce what is known as a Catahoula Cur.

The French also lay claim to the origin of the modern Poodle. They claim that they accommodated the dog as a companion rather than a waterfowl dog.

The AKC recognized the Poodle as an official breed in 1887. It seems that the US knew the Poodle after WWII. In the 1950s, the Poodle gained more fame and ranked as the number one dog breed for two decades among the socially elite. Today, AKC still considers the Poodle as a top dog.

The Breed Appearance of the Catahoula Poodle Mix

A Pooahoula can resemble either its Poodle or Catahoula parent. So, it can either be medium or large in size and stature. Also, its legs are straight while its tail curls above its back.

The body of a Pooahoula is strong. It has a short and dense coat that varies in color. The color may be Catahoula black, brown, gray, red, silver, white, or sable. And its hair may have a medium length with curls.

The head of the Catahoula is medium-sized. Its muzzle is long and thin, and its nose is black. The eyes of this dog breed can be either ice blue, hazel, brown, or Amber. Last, the ears of a Pooahoula are droopy and long with moderately long hair.

Notably, the coat of a Poodle and Catahoula mix does not hold debris and dirt. The hair is short and dense. Also, it does not shed often, and it may have hypoallergenic qualities. So, a weekly brushing using a pin brush is all you need to keep the coat smooth and shiny. You may also consider clipping its nails.

However, the ears of the dog require more attention during a grooming exercise. This is because the ears have long hair that stores dirt and moisture that can cause ear infections.

What is the Temperament of the Catahoula Poodle Mix?

Pooahoula does not like loneliness. It likes socialization, especially with children. However, it is cautious with strangers. So, it takes a little more time to warm up to strangers.

A Catahoula is never shy or aggressive. Even though it does not like being with other dogs, an early and consistent introduction to other dogs and pets makes a Catahoula accommodative to them.

Training a Catahoula varies in difficulty. However, a confident owner can train the dog without much fuss.

How Much Activity and Exercise Does the Poodle Catahoula Mix Need?

Overall, Pooahoulas are active dogs that love the outdoor environment. They love running around. So, give your Pooahoula at least 60 minutes of daily activity.

Also, get a strong leash and lend a firm grip while walking the dog. Importantly, walk your Catahoula twice every day. The dog should cover 10 miles (16 kilometers) every week  At least.

If you do not have other dogs around, you can give your Catahoula a trip to a dog park. However, remember that it will be unfriendly to other dogs at first.

Catahoulas do not find an apartment as ideal living quarters. So, always have a large backyard to accommodate its activities. Last, a Pooahoula thrives in a warm climate as opposed to a cool one.

Is a Leopard Doodle Easy to Train?

If you mate a Catahoula Leopard with a Poodle, you will get a Leopard Doodle. It is an intelligent dog that you can train to do several things. However, it is stubborn, and it requires consistent training and patience on your part.

Notably, you can succeed in training a Catahoula leopard dog mix breed after meeting its physical needs. Failure to do so makes the dog act out.

Is a Catahoula Poodle Mix an Excessive Barker?

If you train your Catahoula to refrain from barking early, it will adopt the habit. Regardless, Catahoulas are not excessive barkers.

How are Leopard Doodles with Other Pets and Kids?

Unlike other Catahoulas, Leopard Doodles are friendlier. They are accommodative to children, including children that are strangers to it.

The Leopard Doodles are also friendly to other pets. So, expect to have an easy time at a dog park. However, you need to train it at an early age. Over time, it gets more accommodative toward strangers and other pets.

When your Catahoula is a puppy, it can be noisy. However, it becomes calmer after reaching six months.

Your Pooahoula adapts well in a new environment. All you need to do is ensure you have a spacious outdoor area to meet its physical needs.

If you are starting as a dog lover, you might find a Pooahoula a difficult pet. The solution to the issue is to get a Pooahoula puppy that has already begun the training process. Also, look for training tips or take your puppy to a training class.

Given that Catahoulas are playful, they can wander off easily. So, keep it on a leash whenever you are walking it. Alternatively, you can let it loose in a closed field.

If you love hunting, you will find a Catahoula as the best hunting companion. The dog loves to run after various prey, including birds and little animals.

Are you thinking of holding your Catahoula on your lap? Well, it will maintain the position depending on its nature. For example, some Catahoulas are docile, while others have little patience.

Talk Poodle to Me

We have so much information about Poodles –more than you can ever consume. So, we are always ready to answer any question or share any insights on Poodles.

We find Poodles invaluable pets that deserve a high level of love, attention, and care. So, we take Poodles seriously. Reach out to us with any inquiry, recommendation, insight, or contribution towards the Poodle information bank.