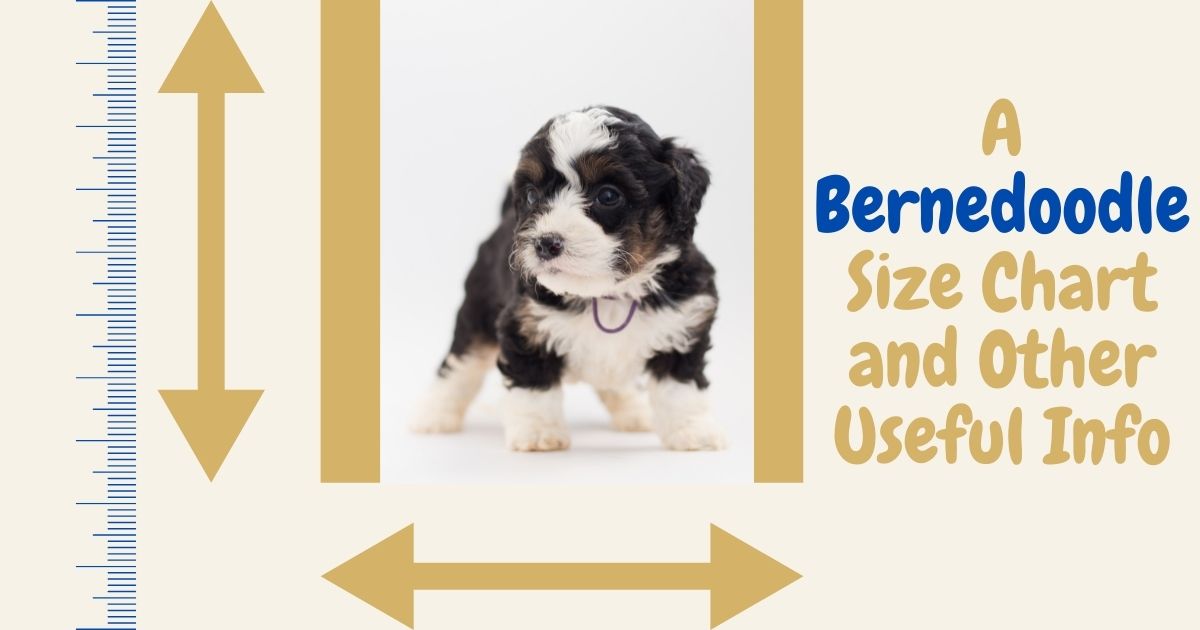 How Big Do Bernedoodles Get?

If you’re thinking about getting a Bernedoodle, you’ll probably have one of the first questions being how big the dog will grow. The Bernedoodle size chart will be of help in determining how big your Bernedoodle will grow.

After all, the pup will grow big as per the Bernese Mountain dog growth chart. If the breed turns out to be too huge for you, you should be aware of this before adopting one.

Bernedoodles, like most dog breeds, grow the most during the first four to eight months of their existence. They will have reached around half of their adult weight at this point. Your Bernedoodle puppy must receive the proper nutrition to develop into a healthy adult.

The age at which a Bernedoodle reaches full height varies greatly depending on the breed.

Smaller dogs, such as Tiny Bernedoodles, attain this naturally much sooner, at around 8-10 months, while Standard Bernedoodles can take up to 14 months to reach their full size. At 10-12 months, miniature Bernedoodles will be somewhere in the middle.

As their muscles mature, they will most likely continue to grow outwards until they reach adulthood. As a result, their weight will continue to rise. Let’s take a look at some of the Bernedoodle facts we have:

It’s simple to look at a weight chart for your full grown mini Bernedoodle puppies. To see if your dog follows the typical curve, you must use your pup’s age in weeks and see where it lines up with his weight. The graphic does not usually contain heights, but they follow a curve. We break down the Bernedoodle weight chart into the different sizes of Bernedoodles.

Between three and a half and five months, tiny Bernedoodles reach half their total weight, and between 9-11 months, they reach adult weight. Take their weight at 18 weeks and multiply it by two to get their potential adult weight. The smallest Bernedoodles are Mini Bernedoodles. They should weigh around 10 pounds (4.5 kilograms) at eight weeks of age, which is comparable to other Bernedoodle breeds.

However, after that, the difference becomes significant. Your miniature Bernedoodle puppy should weigh around 20 pounds (9 kilograms) when he is 20 weeks old. After that, they won’t grow much more, reaching full size around 44 weeks; although their growth will slow considerably because they are little canines, their maximum height and weight range from 12 to 17 inches(30.5 to 43.2 centimeters).

They attain their maximum size about a year of age, which means they mature before the Standard Bernedoodle. This breed still has a wide range of weights and heights, so don’t worry if yours doesn’t quite fit. Medium and miniature Bernedoodles reach half their full weight between the ages of three and a half and five and their adult weight between 11 and 13 years.

You may calculate their potential adult weight at 18 weeks by multiplying their weight at that age by two.

Their maximum weight ranges between 70 and 90 pounds (31.8 and 40.8 kilograms), but this can vary depending on your dog’s growth curve. Bernedoodles reach half their full weight between the ages of four and a half and six and their adult weight between 12.5 and 16 months. You may compute their projected adult weight at 23 weeks by multiplying their weight at that age by two.

How to Calculate a Bernedoodle’s Growth

There is a formula you can use to estimate your Bernedoodle’s growth rate. This formula is calculated based on your puppy’s age. It is as indicated below:

Are you confused yet? Let’s take it a step further. Bernedoodles reach about 30% of their entire growth at around 12 weeks or 3 months, according to estimations. So, if your Bernedoodle is three months old and weighs 10 pounds (4.5 kilograms), you would use the following formula:

When Do Bernedoodles Stop Growing?

Unfortunately, there’s no guarantee that they’ll stop growing at a specific age. Keep in mind that the parent dogs can have a big impact on overall growth and pace. Bernedoodle parents are not necessarily the most common choice, especially given the vast variety of Bernedoodle sizes.

You’ve probably heard that most dogs stop developing after 12 months; however, this is a misconception. The good news is that kids are not growing anymore by this age. Your little Bernedoodle will be at least 90% full weight and largely completed growing in height at 12 months, but they can continue to develop in small increments until they are three years old!

Experts estimate that your Bernedoodle will be mature enough at the age of two. The first year of life sees the most growth, but because this is a giant breed, they grow slowly over time. Take a look at the different stages of growth and what you can expect from your grown Bernedoodle as it matures and stops increasing in height and weight.

A newborn Bernedoodle should weigh roughly 0ne pound (0.45 kilograms) at birth, but that should double within the first week, depending on the sort of Bernedoodle you obtain. At this point, they will be entirely reliant on their mothers and will not move much. They will also only drink and eat the mother’s milk at this point. It is necessary for growth.

At this point, your Bernedoodle puppy will be rapidly growing. Where the pups are generally close to mom in the early stages of life, it won’t be long before they start getting into mischief. By 12 weeks, your Bernedoodle puppy could weigh up to 35 pounds (15.9 kilograms). He will have weaned himself from his mother’s milk at this stage.

Between the ages of 4 and 6, your Bernedoodle puppy can weigh anything from 45 to 55 pounds (20.5 to 24.9 kilograms). Around this time, his growth will begin to slow, but his appetite will most likely remain voracious. You should feed him three meals every day to ensure he gets enough calories throughout the day, as he is likely burning many calories while playing.

You’ll see how large of a dog this puppy will be at seven to nine months. It will weigh around 60 pounds(27.2 kilograms) by the time it is nine months old, but it will continue to develop. These dogs can still gain a healthy weight until they reach the age of two, but their growth rate will reduce dramatically.

There is still some growth between the ages of 10 and 12 months. Although the growth rate will have slowed somewhat by this time, you can still expect to acquire weight. Your dog should weigh around 65 to 70 pounds(29.5 to 31.8 kilograms) by his first birthday, although this is not his final weight. He will continue to develop beyond this age in the coming year.

Finally, your dog should cease growing once he reaches adulthood. However, you may have noticed that it does not happen as quickly with these dogs as with other dogs. Bernedoodles can continue to develop until they achieve their final height and weight at the age of two.

Various variables, including genetics, influence the growth of a Bernedoodle puppy. The most significant determinant of your puppy’s size is genetics. As discussed earlier, you can mix Bernedoodles with a Standard Poodle, a toy Poodle, or even an Aussiedoodle.

Mixed breeds make determining an average size for your dog more difficult, but keep in mind that heredity determines your dog’s height and healthy weight. There are also breed-specific percentages that influence puppy development.

Nutrition influences any dog’s growth. While a bad diet will not affect your dog’s eventual height, it will harm him in other ways. This could include issues like joint problems that develop later in life. Their brain health will influence your puppy’s growth.

It’s critical to provide your dog with the healthiest food available, devoid of fillers and unneeded substances. Do not feed your puppy any supplements unless your veterinarian advises you to.

Physical activity impacts your dog’s overall health and growth, just as it does in humans. Younger puppies do not require much exercise since they exhaust themselves by running around and playing, requiring lots of rest. However, as your puppy grows, he will require more activity. Walking or playing fetch with your dog are also excellent ways to exercise.

The Different Types of Bernedoodles

F1 Bernedoodles are a 50:50 hybrid of a purebred Bernese Mountain dog and a purebred Poodle. When people talk about Bernedoodles, they usually mean F1 Bernedoodles. F1 Bernedoodles have a wide range of physical traits based on their genes. Some of them appear to be a mix of both parents, while others seem to have more of one parent.

Others may not resemble their parents at all. Each dog’s coat and shedding pattern may differ. If an F1 Bernedoodle’s bloodlines are more Bernese Mountain dog, its hair may be flat and straight. Bernedoodles with more Poodle genetics have a curlier or wavy coat and shed less.

This dog is a hybrid of a Bernese Mountain dog and an F1 Bernedoodle. We rarely mate reverse F1B Bernedoodles due to their excessive shedding, they have Bernese’s build, temperament, and other qualities.

F1BB Bernedoodles are the second backcross with a 100 percent Poodle, as indicated by the double “B” in the name.

The F2 Bernedoodle is a second-generation Bernedoodle born from parents who were both 100% Bernedoodles. It has a balanced genetic composition of both breeds because its parents are a 50:50 mix of Bernese Mountain Dogs and Poodles.

F2B Bernedoodle (Back Cross So Even More Poodle!)

F2B hybrids are puppies that are a cross between an F1 Bernedoodle and an F1B Bernedoodle. They are genetically 62.5 percent Poodle and 37.5 percent Bernese Mountain dog. This gives them a Poodle-like appearance and demeanor.The coats of F2B Bernedoodles have general curls like a Poodle’s, but apart from that, they look like any other Bernedoodle.

Alternatively, some breeders will mix an F1B Bernedoodle with another F1B Bernedoodle to produce puppies with 75 percent Poodle genetic makeup. F2B Bernedoodles with a very curly, hypoallergenic, and velvety coat is more likely due to this.

F2BB Bernedoodles are a cross between an F2B Bernedoodle and a purebred Poodle. Although they do not have the same appearance as Poodles, their genetic composition is remarkably similar. F2BB hybrid is a good choice if you want a Bernedoodle that sheds little and is “allergy-free.”

F2BB Bernedoodles have very curly fur due to their resemblance to Poodles. As a result, they require regular grooming to maintain a tangle-free and silky coat. From the F2BB line, we frequently refer to them as multi-generation Bernedoodles. They aren’t technically Bernedoodles from the first or second generation.

They’re a Poodles and Bernese Mountain Dogs hybrid if you’re lucky enough to get one. F3 Bernedoodles usually have wavy or curly fur when it comes to their coat, indicating that they originate from the Poodle family.

It’s difficult to know when a Bernedoodle is completed growing, but perhaps these ideas and insights will give you a good idea of what to expect in terms of growth and when. Keep in mind that knowing your Bernedoodle’s genetics can help you better comprehend their growth patterns.

The more information you have, the better! Here’s to a healthy and developing Bernedoodle in your home! We are sure this article is of great help to you and you are now well placed in terms of what to expect with your Bernedoodle growth chart.